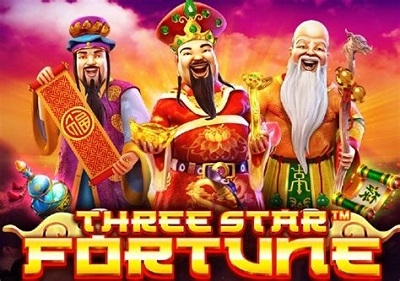 The Three Star Fortune video slot, produced by Pragmatic Play, is set up to give players one of the highest hit-rates they will find anywhere for a game with 10 paylines. It offers expanding wilds, re-spins and pays in both directions that all come together to offer some really strong prizes.

An Introduction to Three Star Fortune

If you look at what a software provider in the online slots space has to offer, you have to consider their portfolio as a whole and the role that each individual game has in that number. With the Three Star Fortune online slot by Pragmatic Play, you see that the role it has in the overall portfolio is that of a very low volatility and a very high hit-rate.

This is a play style that has a tremendous following among fans, and that makes it a critical part of their overall offering.

There’s no denying that this is a gorgeous game. There are flowing waterfalls and a city scene in the background of this Asian-inspired concept used in this title. The symbols on the reels look good as well.

The gameplay is where it’s really at for this slot, however, and as you’ll see in what follows, the action is at a particularly high level.

The format here isn’t particularly out of the ordinary, but there are some things about it that you’ll want to pay attention to so that you get the most out of your experience and know what to expect. Here’s what you’ll be working with in this title:

As we’ve mentioned a few times already, the hit-rate of this game is really high. As a result of this and the way the features are set up to largely be a function of giving you more value from the regular pay table, the volatility level for this slot is also particularly low. This gives the title a play style that appeals to people who like getting their value from the pay table instead of features that rarely trigger.

With the Three Star Fortune online slot, everything centers around the regular pay table and the ways that wins are given to help you boost your pays from that pay table. There are no second screen bonus features or additional free spins modes in this game, which automatically makes it stand out from the crowd.

There are three wise men who are wild symbols in this game. They have purple, green and blue backgrounds and look a little different from each other. These three colors correspond to the second, third and fourth reels (from the left), respectively, and those are the only reels on which these wilds will appear.

Note that you cannot make winning combinations that only consist of wilds, but that’s made up for by the other features.

Because this game pays in both directions, they double the ways they are useful, but that’s not all that they offer that increases your value as a whole.

When any of the three wilds appear on the reels in the Three Star Fortune video slot, they will always expand to cover the entire reel. It doesn’t matter what the conditions are, there is a 100 percent chance of them expanding every single time one of them appears.

This does two major things to the overall structure of the game:

It’s worth noting that the two above factors are compounded further by the fact that you have wins going in both directions.

We want to make something clear about the bidirectional payouts in the Three Star Fortune video slot. You will get the single best payout available in each direction on each individual payline, and that means a total possibility of up to 20 wins is calculated.

Seeing how the wild symbols work in this way is pretty critical if you want to keep up with how the payouts are awarded overall.

After any wild hits the reels, the payouts will be given as usual after the wilds expand to cover the entire reels that they landed on. However, those wilds will lock in place afterward to give you a free re-spin.

During this re-spin feature, special reels are used that give you better chances of hitting winning combinations on the upper end of the pay table.

Again, we see a feature that increases your hit-rate and that boosts the size of your average win per paid spin.

Note that if you get more wilds during your re-spin, they will also expand and lock in place, and all wilds will stay in place for the resulting re-spin until no new wilds appear. As a result, you can end up with three re-spins in a row at the most, and that last one will only have two reels left that are not wild for tons of guaranteed wins that would consist of four of a kind combinations at the least.

How to Win at Three Star Fortune

The main thing to keep in mind about this game is that the hit-rate is really high, and that combined with the feature set makes the volatility pretty low. The best betting-based response to this is to increase your bet size to get better payouts when you win while still enjoying the smaller overall swings relative to your bet size.

Other than the wilds, there are just seven symbols that grace the reels, and that makes it easier to hit winning combos compared to if there were more of them. The golden ingot pays 25x for five (or 20x for four, which is also a good win). You’ll also pick up 12x for five of the rose or 6x for the scroll. Five of a kind combinations of the bottle pay 5x.

There are also three other symbols in purple, blue or red. The purple pays 4x for five, and the wins are 2.5x for five of the blue or red.

These payouts are expressed as multiples of the total bet size. Also note that five of a kind wins pay in both directions, so you always get paid twice when you get them (ie: a 25x win for five gold ingots is actually a 50x payout total).

We know that players in general love video slots with a high hit-rate and exciting features that hit often, and that’s exactly what the Three Star Fortune online slot brings to the game. Pragmatic Play put together a particularly strong slot for the Asian-themed sub-genre here, and the focus on the gameplay is what really makes it solid overall.