Valley of the Gods 2 Casinos and Review 2020 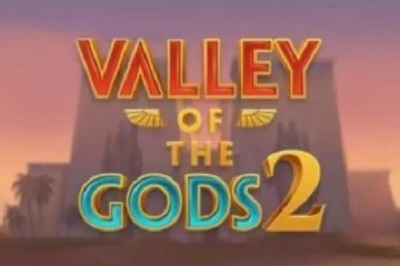 The Valley of the Gods 2 online slot by Yggdrasil Gaming is a direct sequel to the original, and it uses a very atypical format that offers tons of features that activate frequently. The wins are serious and the features bring a lot of action in this title with up to 20,160 ways to win on each spin.

Casinos with Valley of the Gods 2

An Introduction to Valley of the Gods 2

If you’re the type of player who likes a lot of feature-based action with stuff that hits frequently and that provides a good amount of value, then the Valley of the Gods 2 video slot is definitely a game that you should check out.

The gameplay is fast-paced with a lot of value coming from frequently hitting features that are tied into an atypical format based around a pyramid in an Egyptian theme.

There is no shortage of online slots that use Egyptian themes, but this one is different. Instead of it just being a virtual paint job put over a generic game, it’s a core part of the gameplay itself, the structure and the feature set. The cohesive degree to which this title has been put together is very impressive, and that’s on top of the fact that the action is so serious.

The visual appeal of this title is worth pointing out as well because it looks great. There are several characters based on Egyptian deities that look super solid, and the background is a gorgeous landscape within an ancient Egyptian city.

The format for this title is a critical part of the gameplay instead of a bit of an afterthought like you find with most slots. Here’s what to expect:

We want to point out that the hit-rate for this game and the volatility are both in the medium range. That gives this title a balanced style of play that’s centered largely around getting more value from the features than average but still getting some decent pays from the regular pay table.

The gameplay of the Valley of the Gods 2 online slot is all about the feature set and how it takes advantage of the atypical format. If you like games that are a little outside of the box without it being to the point that it’s difficult to learn how to play, then this is a title that you should definitely check out.

The wild symbols can show up as a part of the features from the re-spin mode, but they do not appear normally on their own. However, they will cover an entire reel when they do appear, and they will stay in place until it’s a part of some win.

As a result of how the wilds are used in this title, you will not find any specific payouts for combinations of wilds. With that said, they still offer a lot of value, but they are used in a bit different way than what most players will probably be used to.

Every win that you get on the game board activates a respin. The way this works is that you’ll be given scarabs for each win, and each individual scarab you pick up will destroy one of the yellow stone scarab blockers. As a result, this opens up the game layout more than usual and gives you plenty of room for extra ways to win.

As a result, you can end up with thousands of ways to win since this happens over and over to give you more opportunities to get paid several times on the same spin.

With these scarab collections, you can activate multipliers. The scarabs can show up in different colors, but when you get blue ones, it increases the multiplier by a factor of one. The different scarabs in the collections are shown on meters to the left-hand side of the game board.

Five blue scarabs will increase the multiplier by one, which starts off at 2x, and that will double the size of your payouts.

Red collected scarabs in the Valley of the Gods 2 video slot activate an extra life. The way extra lives work in this game mode is that you’ll be given a respin when you have an extra life to spare in a situation where you have a losing spin with no wins. This essentially gives you a free chance to win, increase the size of the game board and pick up more features.

The wilds, which we noted above, do not appear normally in this game. To activate a wild reel, however, you can pick up five of the golden scarabs to fill the meter on the left side of the screen. One wild reel is added until it’s a part of a win subsequently.

How to Win at Valley of the Gods 2

Because the volatility is firmly in the medium range, in this game, it’s best to stick with a situation where you’re using something around the average of what you’re used to in terms of bet sizing. This will strike a balance between giving you strong payouts when you win to not having to deal with extreme swings.

Payout Structure for Valley of the Gods 2

The pay table for this game is based on multiples of your total bet size. There are four deities that are most easily identified by color and animal that make up the best payouts. You can win 16x for six of the purple cat, 8x for six of the green crocodile or 6x for six of the red bird or blue jackal. Other smaller wins are available as well to round out the bottom end of the pay table.

If fun is exactly what you’re seeking out in your slots, then you’ll 100 percent enjoy the play style that the Valley of the Gods 2 video slot brings to the table. The look and aesthetic appeal of this slot gives a fun vibe that’s definitely up there with most that the casino industry as a whole has to offer, and the driving theme used as the center for this title is a central springboard for the gameplay experience and action.

As a part of this software developer’s portfolio overall, this is a title that fills a key position since it has appeal to many people. Also, a good number of extra features are available in in this title, and that is a fact players can’t assume for much of the slots world as a whole.