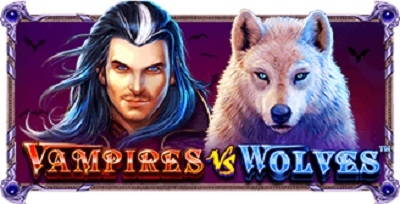 An Introduction to Vampires vs. Wolves

The fight between vampires and werewolves has played out across all different kinds of mediums over time. This includes novels, short stories, television shows, movies, video games and more. Pragmatic Play’s Vampires vs. Wolves video slot brings this fight together once again with a bit of a twist.

In this game, players are getting to see the fight play out over free spins modes primarily where you can win some pretty serious amounts of money.

Action is the name of game when you have a big fight between supernatural beings, and that’s exactly what you get here. Pragmatic Play has made sure that the hit-rate is high, the action is serious and the pace is fast, so this slot is perfect for people who like to see a lot going on instead of having to wait around for something to happen.

There are some very easy to use parameters in place when it comes to the betting for this game. This developer is very serious about making their games accessible without having a ton of complicated controls to use, and you’ll find that here as well:

It’s also worth noting that they’ve made bet size selection really easy with simple up and down controls, but you can go in and manipulate the values of individual coins and the exact number of coins bet on each payline.

With that said, either approach will give you access to the same set of bet sizes, so you’re not really gaining or losing anything by picking one approach over the other.

The features in this game are primarily built around the idea of the conflict between the two supernatural groups. This is a pretty cool approach because it gives the game a particularly coherent feel while keeping the experience action-oriented.

The golden wild symbol in this game makes an appearance on each of the five reels. It will substitute for all symbols except for the scatters. What’s pretty interesting here is that you can get the best individual payouts in the game with the wilds:

The top payout of 100 times your total bet is the same as a 1,000x line bet win, so that’s larger than it may initially seem, and it’s pretty reasonable for a top prize in a game with a hit-rate as high and volatility as low as this one.

There are two stacked scatter symbols, and they work a little differently than other scatters, so we want to point them out in particular.

The scatters only appear on the first and last reels, and they appear stacked three symbols high each.

These scatters do not give payouts on their own, but they do help you to get a free spins mode. The first is the castle where the vampires live, and the second is a wolf howling at the moon. When you get both on the reels at once, where each of them are completely filling up their respective reels, then you will activate a free spins bonus round.

You get to choose which free spins mode you play, and the first open is the Wolf Free Spins. You’ll get 14 free turns in this feature, and the three vampire major symbols will turn into wolf symbols and wilds at random to give you better chances for larger payouts. You’ll have special reels in play as well to give you better payouts on average.

With the Vampire Free Spins feature, things work similarly where the wolf symbols turn into vampires at random. However, you’ll only get eight free spins here, but there’s more to the feature than that:

When any vampire symbol shows up, it has a chance to randomly turn into a wild symbol, and that wild will stay on the screen until the end of the bonus feature.

It’s clear that this is a more value-packed feature on a per-spin basis, but you only get eight spins instead of 10, so you’ll have to choose whichever sounds the best to you.

How to Win at Vampires vs. Wolves

The key thing to understand about this slot is that the volatility is at a medium-low level, and the hit-rate is high, so the swings are going to stay pretty reasonable. This means that you can crank up the action with a bit higher bet size than usual without having to worry about your entire bankroll getting wiped out with one single downswing or bad run of luck.

This is made even more viable by a betting system that gives you tons of small increments of bet sizes to choose from, so you can really customize your wagers.

Payout Structure for Vampires vs. Wolves

The pay structure for this title actually comes down to three pairings of characters who are werewolves or vampires along with a lower-tier set of symbols for the bottom-end payouts.

The werewolf symbols are in blue frames, and the vampires are in red frames. You can earn payouts for the following:

Each of those has a pairing, so there’s an elder male vampire, an elder man werewolf and so on.

Pragmatic Play’s Vampires vs. Wolves slot is centered around giving players a ton of action in a setting where a lot of action makes sense. We think the following points outline the highlights of what this game has to offer:

To keep a balanced view on things, here are some things that some players may not like:

Overall, we don’t believe these are major issues that will bother most players most of the time. All in all, the Vampires vs. Wolves video slot is a super solid game that will appeal to most players in one way or another.