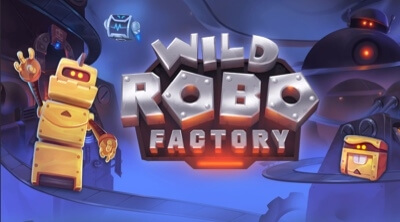 The Wild Robo Factory video slot, produced by Yggdrasil Gaming, brings players to an action-packed junkyard where you can try to get lots of different types of wild robots on the reels. The graphics of this game are fun and playful, and the gameplay is centered around a lot of wild features thanks to the wild robos that are noted in the title of the game, both of which combine to give players an excellent overall experience.

Action is the name of the game in the Wild Robo Factory online slot, and players will get plenty of it thanks to the robots that populate the reels in this junkyard-themed title. Yggdrasil Gaming has put a lot into giving players a high level of action with what this game is bringing to the table, and the fun graphical style is just the beginning.

If you like games with a high hit-rate but that also allow for some pretty serious total wins, then this is a title that you’ll want to check out yourself.

What really stands out to us here is that Yggdrasil has made a title centered around gameplay instead of worrying so much about a fun theme that will catch a ton of attention. For us, that is the height of giving players quality instead of quantity and substance instead of flash in a pan.

There’s not a lot to worry about when it comes to the format and wagering options for this title. You’ll find the following pretty much sums up what you need to know:

You aren’t going to find many developers that offer coin sizes this small so that players can enjoy all paylines activated on a game without having to wager several times more, and that just shows how serious Yggdrasil is about giving players the options they want in all of their games.

Gameplay is the centerpiece of this video slot, and with a name like Wild Robo Factory, it’s not hard to imagine that a lot of it is based around wild symbols. We’ll break down everything that you need to know about these features in what follows.

All of the wilds in this game are robots that appear in different ways with different extra features. They all stay stuck to the bottom of the game board, and because of this, they move along from right to left on a conveyor belt across multiple spins. This means that when wilds show up, they almost always appear across multiple spins, which means more value and more chances to get extra winning combinations.

When the robots appear, they can show up stacked up to four symbols high. This not only gives you more opportunities to get multiple wins on the same spin, but because they move across the conveyor belt, that means the two features compound to give you a ton of opportunities to get paid.

Additionally, the robots can appear in other clusters and patterns, though they are always “stuck” to the bottom of the reels. That means one robot can consist of several clusters across multiple reels. When this happens, they can take up multiple spots on the same paylines, which makes longer winning combinations even easier. There are even some combinations that guarantee at least a three-of-a-kind payout when they move all the way to the left side of the reels on the conveyor belt.

What’s more is that you can end up with twin robos as well. When you get twin robos in the Wild Robo Factory video slot, you’ll have two of the same matching robots on adjacent reels stacked at the same height. These will cover some serious territory along matching paylines, which means guaranteed wins once they scoot to the left side of the game board.

Players can end up with wild multipliers as well. You can identify one of these by their black layer with glowing red eyes near the top of the pile of symbols that make up their body, and they will also have a “Wild X2” marking along the bottom of them under the lower end of the reels.

Whenever a wild multiplier is part of a winning combination, it will multiply the value of that win by a factor of two, which doubles it.

There are two types of free spin symbols. Some of them will spin like normal symbols, and others are robos that will move along from left to right across the reels after appearing. This makes it easier to get enough of them on the reels to trigger the feature.

Five of these symbols gives you a counter of 15 robos on the free spins, and four or three will give you 10 or five, respectively. The free spins mode is not based on the number of actual spins you get. Instead, it’s based on the number of wild robos that are added to the reels. You’ll have a counter at the bottom to show you how many robos are left in the feature, and you’ll keep getting free spins until they run out.

In the free spins mode, you can also trigger an overload. Overloads cause the conveyor belt to run in the opposite direction, which extends the life of your free spins mode by keeping the robos on the screen for longer.

In the regular game (not in the free spins mode), you can trigger the Robo Re-spins feature. This can be triggered at random whenever at least one robo shows up on the screen.

In this feature, you’ll continue to get re-spins with the robo moving across the reels until it moves completely off of the left-hand side of the game board.

This is essentially like getting the free spins mode except you can’t access overloads, and it’s a cool way to give free turns and opportunities to get paid.

How to Win at Wild Robo Factory

On the most basic level, you don’t have to do anything in particular to get better chances to win at this game. Knowing the rules can help you to understand what’s happening on the game board, however, and that includes one feature that we didn’t list above:

The Symbol Swap feature will allow low-level symbols to transform into upper-tier symbols at random to give you extra wins.

Other than that, you may want to increase your bet size a little than what you normally pick because there are so many increments available that it really allows you to hone in on the exact amount that you’d prefer to wager.

The bottom line with Yggdrasil Gaming’s Wild Robo Factory slot is that players get a lot of cool things going on all at once. The multiple wild symbols and the way they are presented as an integral part of the landscape of the game were really solid choices. The pay table is actually pretty balanced as well with some strong wins at the top end of things and plenty of mid-tier payouts.

If you like action and features that you don’t have to wait forever to trigger, then this is a title to check out.