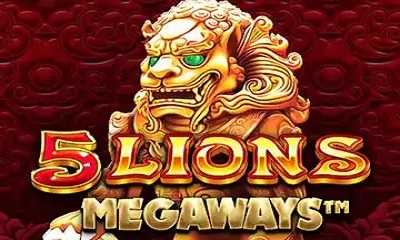 With the 5 Lions Megaways online slot from Pragmatic Play, you get a tremendous number of ways to win. This comes from both the regular pay table as well as the in-depth bonus features. The hit-rate is particularly high for this title as well.

An Introduction to 5 Lions Megaways

Pragmatic Play’s 5 Lions Megaways video slot uses a fun Asian-inspired theme. There are various animals shown on the game board like a phoenix, a koi, a turtle and a lion. However, it’s the gameplay that will keep players shooting for more in this slot.

While this slot has an excellent presentation, the gameplay is the main draw.

We really like how the graphics are set up for this title. They look great, and there is a good contrast between light and dark motifs. However, it’s not so overpowering that it comes across as gaudy or overproduced. That’s exactly the kind of balance that we like to see, especially with the detail shown to the symbol set.

On the gameplay end of things, this is a title that brings a lot to the table. The feature set is particularly rich. However, it’s really the regular game mode that sets the tone the most. The hit-rate is high, and you get tons of ways to get paid. What’s more is that the features complement the normal play mode to give you access to even more ways to win. This especially includes opportunities to get several wins on the same paid spin.

The betting setup in this game is pretty straightforward. However, there is a side bet that we’ll recommend players take, and we’ll explain that in the following. Here’s what to expect:

It’s worth noting that there is a side bet shown on the bottom-left corner of the screen. This increases your bet size by 25 percent. In exchange, you’ll receive an increased chance to hit the main bonus feature. Activating this side bet does increase the volatility of the game somewhat. However, it also increases your payout rate.

All of the wins for this game are centered around a multiple of the base wager. This does not incorporate the extra amount paid for the side bet. However, with the side bet activated, the overall volatility of this game is in the medium range.

The feature set of the 5 Lions Megaways online slot is pretty fun. There are features that increase your value during the regular mode. However, there are also options for bonus features that give you value a different way. We’ll break down all of these in what follows. This will help you to know what you’re getting into before you start playing.

If you happen to pick up more wins, then the process continues going until there are no new wins. That means that you can pick up tumble wins several times off the back of the same paid turn.

The golden dragon symbol is a wild in this game. It will make an appearance on the second, third, fourth and fifth reels only. Since it only resides in the middle four reels of the game, it doesn’t have its own payouts.

However, it does help to get you a lot of extra wins. This is especially important within the Megaways format. With that said, it substitutes for anything other than the scattered yin-yang symbol.

What’s really valuable about these wilds, however, is that they have multipliers associated with them. If a winning combination includes at least one wild, then it can get a random multiplier applied to that win. The available multipliers run from 2x up to the 40x level. This applies in both the regular game mode and in the free spins.

As we mentioned above, the yin-yang symbol is the scatter for this game. It has some pretty solid payouts as well. Getting three or more of them will give you the following wins:

These scatters pay out no matter where they appear. They don’t have to show up on any particular reels for the wins to count. Additionally, they don’t have to line up in any certain way either. As long as they make an appearance anywhere on the game board, you get a win.

The 5 Lions Megaways video slot gives players an opportunity for free spins. Three or more scattered yin-yang symbols will trigger them. However, no matter how many scatters you use to trigger the feature, you’ll still have the same seven options to pick from:

This is a cool way to customize your bonus feature a bit. It’s also worth pointing out that the free spins mode uses a special set of reels. These reels give better payouts than the regular game mode.

How to Win at 5 Lions Megaways

It’s extremely important that you play with the side bet activated. While this does cost a little more, and while it does increase the volatility of the 5 Lions Megaways online slot, it also increases your overall payout rate as a percentage. Without it, you’ll actually have a higher house edge in this game.

With the side bet activated, the volatility for this slot is in the medium range. That means you should pick a bet size that’s around the average of what you tend to like. As long as you’re comfortable with the bet size, you’ll be fine in this game.

The red lion symbol earns players 25x for six of a kind. You can pick up 5x for six of the pink phoenix or the green frog symbols as well. From there, things drop slightly to the 2.5x level. You can get this payout for six of a kind combinations of the blue koi or the purple turtle.

From there, decorated card rank symbols make up the rest of what’s available. The red A and orange K symbols pay 1.25x for six. Finally, six of a kind of the yellow Q, blue J or purple 10 award you 1x. Note that all of these symbols pay out for three of a kind or more.

The animal concept is handled in a really intelligent way in the 5 Lions Megaways video slot, which is different than it only being an afterthought like what we see in a lot games. If you’d like another Pragmatic Play animal-based slot, try the Buffalo King Megaways game. The excitement is absolutely boosted by the great amount to which the presentation perfectly fits the slot’s theme. As part of this software developer’s portfolio as a whole, this is a video slot that holds a critical job since it has appeal to so many players.

The pay rate of the features in this slot is so big that video slot fans will be sure to not get bored of playing. Additionally, the feature-based style of play of this game is all about offering slot fans a ton of excitement.

Which online casinos have 5 Lions Megaways?