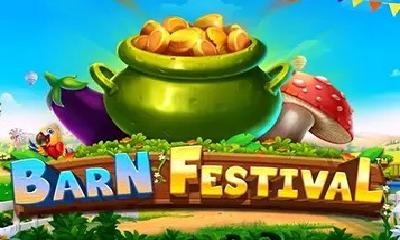 The Barn Festival online slot from Pragmatic Play is a farm-based slot with an atypical style of play. Everything in this game is a full scatter symbols. With an extra-large layout, this means you have plenty of opportunities to hit big scatter wins and more.

An Introduction to the Barn Festival Slot

Pragmatic Play slots are known for covering a wide range of ground. As a whole, their portfolio offers something special to virtually every single type of player out there. Additionally, it’s their ability to maintain a high level of quality while offering so much variety that is their primary strength. Along these lines, we definitely see this pattern with their Barn Festival video slot.

With a relaxing gameplay style and smooth, easygoing graphics, this is the perfect game to sit back and relax with.

The farm-based theme is perfect for this relaxing style of play. It’s a pairing that we see in other popular slots like King Carrot as well. The graphics are tremendous with a super cute and detailed animated background scene of the farm. Additionally, the reels hold a variety of fruits, vegetables and other symbols. Every single symbol has been crafted with a lot of detail and care, and that level of quality really contributes to the overall experience.

When it comes to the gameplay, the relaxing style continues. However, that does not mean that this game is boring by any stretch of the imagination. Instead, it means that things have been boiled down just a bit to the most important components. The change in how payouts are done so that all prizes are scatter wins is one important change. Additionally, they handled the bonus feature in a way that we haven’t seen before. Subsequently, it offers a whole lot of value while still standing out on its own.

The whole idea behind the betting setup in this game is that relaxation is the name of the game. As you’ll see in the following, scatter wins are the focus of what this slot brings to the table. If you keep that in mind, you’ll very intuitively understand what the gameplay is like by just reading over our breakdown in the following:

Because you don’t have a traditional line structure in this game, wagers are not based on how much is bet on each line. Additionally, this means wins aren’t based on this system either. Instead, all payouts are simply listed out based on a multiple of the amount wagered as a whole. We think that simplifies what players can expect from the pay table. It also removes some of the “mental math” involved with more complicated listing approaches.

Keeping with the relaxing gameplay motif, you have this idea of the swings not needing to be too excessive. One way to achieve this is by keeping the hit-rate above-average, which Pragmatic Play definitely did here. However, another way that goes along with that is keeping the volatility around average or below average. As it turns out, the volatility for this game is around the medium range.

Note that Pragmatic Play will call this a high-volatility slot. That’s because it’s high compared to their games on average. However, when you look at the industry as a whole, it’s really around average overall.

Gameplay and Features for the Barn Festival Video Slot

Just because the gameplay of the Barn Festival online slot is straightforward and relaxing does not mean it’s boring. In the following, you’ll see how everything is broken down and how boring is the last thing you have to worry about with this game. This includes how pays come quickly on the regular pay table, but it also includes the super exciting re-spin feature.

The first thing you’ll want to know is how the scatter wins work. You have five symbols that are crops, and they’re at the upper end of the pays. Additionally, the four card suit symbols show up for the lower tier. When you get at least eight of a matching one of these symbols on the board at once, you’re given a payout.

However, if you get 12 or more, you hit the maximum prize for that symbol. This isn’t like other games where you need something like 30 matching symbols for a top win. Instead, all scatter wins with 12 or more matching symbols have the same payout.

This helps to keep the volatility reasonable, the hit-rate high and the gameplay balanced.

The main game mechanic is the tumble, which we’ve seen in other farm-based slots like Harvest Wilds as well. Overall, the idea is simple and straightforward. Players have their scatter wins paid out as usual in this game. However, after getting at least one win on the board, you trigger the tumbles.

Here’s how it works. The winning symbols disappear and allow new symbols to fall down in place. Subsequently, once the board is filled again to its capacity in this 6×4 grid, you’re given another chance for more scatter wins.

This process can actually continue over and over again. Pragmatic Play slots like this one don’t have a limit on the number of tumbles you can get in a row. Unfortunately, that’s not something we can say for all of the competition.

In any event, this game mechanic has two main effects. First, it increases the average win when you do pick up a winning combination initially. This is because it tacks on chances for additional pays. Second, this mechanic also adds a lot of action while keeping things relaxing and the gameplay smooth.

The money symbol looks like a green pot of gold, and it drives the main features. It’s called the money symbol because it’ll have a random value assigned to it based on a multiple of the amount you’re wagering. This can range from 1x to 500x your total bet size.

When three (exactly three, not more) of these show up on the board, they work as a win multiplier feature. Their values transform and combine into a multiplier that applies to all wins on the main spin and tumbles for that particular spin. However, each money symbol that lands after this initial trigger also adds to the multiplier further. That includes in the subsequent tumbles.

While the multiplier feature is nice, it’s the re-spin feature that has the chances for the biggest payouts in the game. It somewhat reminds us of the features in the Nunchucks Chicken online slot as well.

When you get four or more money symbols, you’re taken to the re-spin feature.

A variety of special symbols can also be had in this bonus round. It’s all about giving you bigger wins, multipliers, adding to your payouts and that kind of thing. Additionally, these special symbols are the main reason why your chances for big wins are so serious in this title.

How to Win at Barn Festival

The overall idea in the Barn Festival video slot is to have a relaxing experience with very few bumps in the road, so to speak. This leads to a balanced play style. Additionally, it means the volatility stays around average (or slightly below). Subsequently, no betting adjustments are really necessary for this game because the swings stay so mild on average.

One thing to keep in mind is that you do have the ability to buy the re-spins feature. This will cost you 100 times your total bet size. It’s a higher volatility way to play the game, however. This means we recommend dropping the size of your base wager down a bit to compensate for how much this feature costs.

Pragmatic Play made the card suit symbols really aesthetically pleasing in this slot. You can get 8x for 12+ of the blue spade or 5x for 12+ of the red heart. Wins of 12 or more of the purple club and green diamond give you 4x and 2x, respectively.

We absolutely love how Pragmatic Play handled their Barn Festival slot. It centers around a great aesthetic while also offering a relaxing and inviting style of play. We don’t really get the feeling of being “jolted” around that much with this title, which is largely what they were going for.

Additionally, the feature set is pretty interesting and is actually fairly atypical. We like seeing fresh ideas implemented instead of just following the “same old thing.” Pragmatic Play slots are generally good about that, and this game is yet another example.

Which online casinos have Barn Festival?

What is the Return to Player (RTP) for Barn Festival?