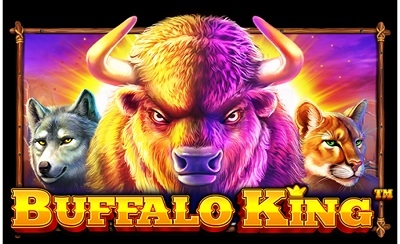 The Buffalo King online slot by Pragmatic Play brings players a tremendous amount of action within a theme based around the American south-west. There are 4,096 ways to win on every spin, and you can get a tremendous free spins bonus with multipliers on the stacked wild symbols.

An Introduction to Buffalo King

One of the things that Pragmatic Play is known for is using some fairly straightforward and, if we’re being frank, somewhat boring themes in their games. The idea is that they make up for the lack of big media brands in their portfolio with solid graphics and tremendous gameplay, and that’s definitely what you get with the Buffalo King video slot.

This title has a concept centered around the south-west United States, and this is captured tremendously in the background and symbol graphics.

You’ll find that this theme comes alive with a number of animals like cougars and wolves, but there’s also a mesa-centric desert background behind the reels that looks tremendous.

In terms of gameplay, this is a very exciting title with a whole lot of action and ways to get paid. From the larger-than-usual format all the way to the generous feature set, this title is geared toward players who like having a lot going on with a high hit-rate and valuable features.

The format is a bit larger than normal in this game, but it’s all tied into the gameplay in a very intelligent way. Here’s an overview of what you get when you play this game:

We need to point out something about the volatility in this game as well. While the hit-rate is really high, which would typically make the volatility of a game really low, the volatility for this particular title is actually more on the lower end of medium.

This is because of the value tied up in the bonus feature, but it doesn’t change things up that much for most players most of the time.

The gameplay is fast with a lot of action, and the format combines with the feature set to create this style of play. Make sure that you know how each of these features work so that you know what to expect before you play.

There’s a symbol with a mesa on it and a golden border, and it is wild. It also says “wild” across the bottom of the symbol to make it really easy to remember.

This symbol shows up on the second, third, fourth, fifth and sixth reels only.

Because this wild symbol does not appear on the first reel, it can’t help you to get winning combinations of just wilds. However, it does help you to get a lot of extra wins that you wouldn’t have picked up otherwise, and that’s especially the case within the all-ways format.

The golden coin symbol with a buffalo on it is the bonus symbol in this game. If you get three or more no matter where they show up on the grid of symbols, then you’ll pick up a set of free spins.

Here’s how many free turns you’ll get for different numbers of scatters:

Being able to get up to 100 free spins to start off this feature is obviously a pretty big deal, but that’s not all that’s available. You can also add more free spins by getting just two or more scatters on the reels, which is much easier with the huge 24-spot format.

You’ll get five additional free spins for two of a kind, and the free turns added for three or more are the same as the list noted above.

Inside of the free spins bonus feature, the wild symbols change into wild multipliers. The way they work is that they are all assigned a multiplier at random of 2x, 3x or 5x. Every winning combination that includes at least a single wild is multiplied accordingly.

This means that if you had a win with a 2x and a 3x wild, then your total multiplier for that payout would be a super solid 6x, for example.

How to Win at Buffalo King

The volatility of this title is pretty low but not absurdly low because of the free spins feature and the huge amount of value that it has available. With that said, the hit-rate is super high because of the all-ways format with 4,096 ways to win and the fact that you end up with scatters for the high-paying buffalo symbols (the regular symbols, not the wild).

With that in mind, you do have some flexibility when it comes to using a larger bet size than usual since the swings won’t be too bad, but we don’t recommend pushing this too much. The volatility isn’t low enough to keep the swings really low with a large adjustment.

Five different animal symbols make up the payouts for the Buffalo King online slot. You’ll notice that the pay scale for this game is fairly flat, and that helps to keep the volatility low.

The buffalo symbol, which can appear stacked for even more wins, pays 7.5x for six of a kind. The win for six of the eagle or cougar is a solid 6.25x, which isn’t much of a drop off like what talked about above with the pay schedule being fairly flat. From there, 5x wins are available for six of a kind combinations of the wolf symbol or the moose symbol.

Six different card rank symbols round out the lower end of the pay table. The red A and blue K pay out 3x for six, and six of a kind combinations of the green Q or orange J are worth 2.5x. Finally, the purple 10 and cyan 9 symbols award players 2x payouts for six in a row.

Note that all of these wins are multiplied by the total bet size and by your total number of ways available to make each combination.

We really like what Pragmatic Play did with the Buffalo King video slot. They used a larger format than usual in a way that isn’t just lip service and that actually gives players a whole lot of extra value with a high hit-rate. The free spins mode with the wild multipliers and the ability to win hundreds of free turns on the same feature is another big plus as well.

While the theme and graphics are somewhat generic, they’re still done pretty well, and it’s the gameplay that drives this title anyway. If you like a high hit-rate, a balanced pay table and bonus features that really bring the value, then this is a slot to check out.