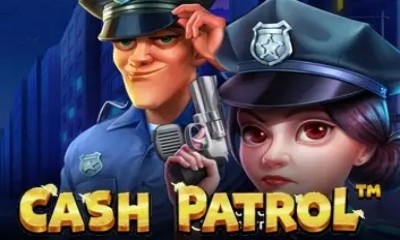 The Cash Patrol online slot is a funny but action-oriented game based around a set of police officers. With a cash collection feature is all about chasing down the bad guys, and with other value-packed features, this is a title that offers a lot to players in terms of ways to get paid.

An Introduction to the Cash Patrol Slot

In most of our media, for one reason or another, we tend to like the bad guys more often than not. The Ocean Drive slot is a good example of how they’re simply portrayed as being cooler, which is what draws people in. However, with the Cash Patrol video slot, Pragmatic Play looked to flip the script on this notion a bit.

While the cops here aren’t necessarily incredibly cool, they’re also not bumbling idiots like what we often see.

That’s not to say that this game doesn’t poke a little fun at the concept because it does. For example, all of the low-tier symbols are card ranks that are decorated like donuts. However, the variety of police officers makes them interesting. Moreover, they all seem to have their own type of personality and character, which we enjoy. A high-speed chase is going on in the background of a city night scene, and that’s when they’re needed in a major way.

Pragmatic Play slots usually offer multiple layers of gameplay. That’s why we weren’t surprised at the robust feature set in this title and how the game mechanics drive a ton of value. Additionally, it’s all tied into the “police hunting the bad guys” theme, so it really works out well. Having strong gameplay that’s linked with a solid visual concept and motif creates a very cohesive experience for players.

The main thing to know about the format here is that they’ve included no real surprises. You don’t have to worry about the grid size suddenly changing on you, for example. However, it still has plenty of room for the features to activate and to get wins on different levels. Here’s what you can expect when you sit down to play.

Even though the coin-based betting system allows for a ton of different increments, it’s not what the wins are based on. Instead, the prizes are based around the total amount wagered. It’s a straightforward and simple way to handle things. Additionally, note that the exact currency amount of your payouts are listed in the pay table. However, here we will list them as a multiple of however much you’re betting. This makes it very clear how much players can win with different combos of symbols.

The volatility level for this slot comes in around the medium level. It’s similar to another cop-based slot Return to Paris with its medium volatility. However, the gameplay and feature set are quite a bit different. In any case, the swings are pretty benign on average, which lends itself to a smooth experience for players.

Gameplay and Features for the Cash Patrol Video Slot

If you’re ready to go out and chase down the bad guys, these features will help you do it. The Cash Patrol online slot is filled with extra game mechanics that are all about this dynamic. However, what makes it even cooler is that it’s filled with ways to get paid while you do it. Even though this title doesn’t take itself too seriously, it still offers a strong amount of action. We’ll break down each game mechanic and what you can expect along these lines in the following.

In the regular game mode, the golden badge is one of the symbols you will want to see the most. The reason for it is simple: More wilds means more wins on the paylines. They will substitute for all of the regular paying symbols as you’d expect. However, they do not substitute for the money symbols, the bonus symbols or the collect symbol. We’ll get more into what those three symbols do further down below.

Note that the wild badges only appear on the second, third, fourth and fifth reels. Its absence on the first reel means that it doesn’t give you winning combinations on its own. However, the value it offers in terms of giving you extra wins you wouldn’t have received otherwise makes up for this.

Additionally, we feel the need to point out how great this badge looks. Its presentation is very bold, which shows off just how important of a symbol it is here.

The bad guy in the black hat looking toward the right is the money symbol. He’ll show up on the first four reels only. However, he doesn’t pay based on normal lines. Instead, it’s all about the random pre-determined values shown over each of them. If you hit at least one of these on the board along with any of the “collect” police symbols on the fifth reel, you’ll trigger a feature.

With that said, the feature is based on which police officer you hit as the collect symbol. Here is an overview of the possibilities based on the color of the cop’s symbol.

As you can see, this is a good mix of different ways the police help you to get paid.

The red flashing light is the scattered bonus symbol. Three of a kind on the second, third and fourth reels yield an instant 1x payout. Additionally, they trigger a set of eight free spins.

In this feature, every money symbol that lands on the board has its value added to a bonus pot. From there, at the end of the feature, players are offered a chance to cash in on that pot. Note that three bonus symbols will re-trigger this feature with an additional eight spins. However, Pragmatic Play has included no maximum on the number of free spins players can get. That means no limitations to the number of free turns you could pick up in a single feature. Additionally, it means no limitations to how big the collection bonus pot could get.

How to Win at Cash Patrol

The medium volatility for this game lends itself to no particularly important betting adjustments. In all reality, our recommendation is super simple. Pick out a bet size that’s around the average of what you’re comfortable with, and go from there. However, if you want to pick something a little smaller when you’re first starting out, that’s completely fine.

In any case, all you need to do is pick out what you’re comfortable with here. No betting adjustment is needed because the volatility is already right at the average for the industry.

If you’re looking for more ways to win, then the Cops N Robbers Megaways game can do it with a somewhat similar theme. However, Pragmatic Play handled things just fine with 25 paylines with the following wins.

Four royal card rank symbols are available the low-end of the pay table. The red A, green K, purple Q and blue J are all decorated like different types of donuts. However, they also all have the same top win of five of a kind getting 4x.

Some games take themselves too seriously in the online slot world. However, the other extreme of being too silly can turn players off as well. Pragmatic Play struck a solid balance with the Cash Patrol slot. The action is serious, the collection feature and free spins in particular, but they didn’t take things too seriously with the theme. We like the balance found here, and we think it will suit what most players enjoy. This is especially the case with the mild volatility levels.

Which online casinos have Cash Patrol?

What is the Return to Player (RTP) for Cash Patrol?