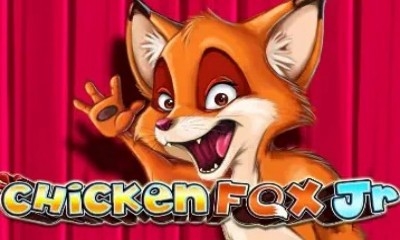 Take a stroll through a chicken house looking for golden eggs in the Chicken Fox Jr online slot. With a variety of fun features playing on the interaction between the foxes and the chickens, you’ll find plenty to get excited about as you try to hatch your own big wins.

An Introduction to the Chicken Fox Jr Slot

Lightning Box Games slots are known for having some pretty atypical themes. Even when they use a theme that’s somewhat common, they always put some really fun twist on it. We’ve seen this tendency with their Chicken Fox Jr video slot as well. It does have a bit of a farm theme, but you’ve never seen it handled quite like this.

Both the gameplay and presentation stand out a lot compared to other farm-themed slots.

The first look you have at this game may make you wonder just what in the world is going on. Eggs of all different kinds of colors are laying around on shelves and on the floor. A big red roof is held up by wooden rafters overhead. However, it’s all a part of the twist put on the chicken house theme by Lighting Box. They really know how to make things stand out, but the graphical quality was kept pretty high. Additionally, even the farm animals on the reels have a lot of personality and character.

Gameplay is all about features in this title, and that makes sense. Since it all comes together based on the interplay between the foxes and the chickens, there’s a certain cohesion between the theme and the play style. We love how this works in principle but also in practice. That’s because it includes a variety of ways to get additional payouts on the regular game mode. Additionally, bonus features are used that add more value than you would normally get otherwise. All in all, it’s a good mix that makes a lot of sense and fits in perfectly with the game’s concept.

Some providers like to really break out of what’s normal for slot formats. However, this developer doesn’t seem to care about that unless it’s really necessary. In this title, they went with a layout that’s pretty typical. With that said, the betting is actually different than usual because of how some of the features work. We’ll break it all down for you in the following:

The thing you’re probably thinking right now is why this game has 30 coins per spin with 20 paylines. We can’t really give you an answer for that, but we can tell you that there’s even more to keep up with. Your wins are based on multiples of the coin size you’re betting. Therefore, you need to divide your bet size by 30 before you multiply it by the amounts given. This is probably more complicated than it needs to be. Additionally, we’d really prefer something more straightforward like the betting setup used in Barn Festival.

All of that aside, one thing you won’t have to worry about is volatility. The volatility level of this game is firmly in the medium range. Accordingly, the swings are about average for the industry. They aren’t so high that they’re annoying, and they aren’t so low that the game is boring. Instead, they’re at a happy medium.

Gameplay and Features for the Chicken Fox Jr Video Slot

We have to admit that the gameplay for this title is pretty fun. Lightning Box made up for their ridiculous betting setup with some fun features and game mechanics. Whether that balances out in the Chicken Fox Jr online slot is something we’ll lead to players to decide.

Nonetheless, it has a number of features to know about, and since some of them are atypical, it would be good to learn about them below before playing. This can help you to avoid any confusion when starting off for the first time.

The blonde farm girl wearing pink is a symbol you’ll definitely want to see show up. She’s always carrying a steaming pie, but that’s not the only reason why. Additionally, she’s the wild symbol in this game. However, since she also appears on every one of the reels, she awards strong payouts too:

A hot steaming pie isn’t the only thing this girl has been cooking. She helps with substitutions to give you all kinds of extra ways to get paid. Overall, the hit-rate is increased a noticeable amount from the wild-assisted wins you get as well.

Right off the bat, we have the fact that the scatters serve two different duties. One of those duties is that they help you to get free spins. This reminds us a bit of how some things work in the Nunchucks Chicken slot too.

However, the other duty is that they really just give you some strong wins. What’s cool is that these pays are multiplied by your total wager. That means you don’t have to do some kind of math problem in your head to figure out how many coins you’re going to pull down. Here’s an overview of the size of these wins:

Again, remember these two things. First, they pay as a multiple of the wager in whole not the coin size. Additionally, the wilds do not substitute for these golden eggs.

As we mentioned above, the golden eggs also help you by granting you free spins. While you need at least three to trigger the game mode, the exact number you start with varies. It’s actually determined by the number of golden eggs on the screen at the time of the trigger. However, it’s pretty intuitive and follows this pattern:

The wild fox symbol appears in the free spins only. He comes in two versions: blue and gold. The golden version also has a 2x multiplier for any wins its a part of via substitution. However, it only substitutes for chickens.

All of the chickens also have cash values shown under their symbols on the board. When the fox catches a chicken, he gives the win shown on the symbol. However, a fox can also catch a white egg to give you additional free spins.

How to Win at Chicken Fox Jr

The feature set is balanced and straightforward in this game. Additionally, the payouts are pretty smooth and balanced as well. These elements come together to offer a medium volatility. That means the swings are pretty smooth on average too. However, it also means that no real betting adjustments are necessary for most players. Just going with whatever bet size is available that’s the closest to what you’re typically comfortable with will be the best strategy for most players.

The one win that’s going to throw players off the most isn’t even the biggest one. Instead, it’s the mixed chicken symbols. Four different chicken symbols can appear on each reel. However, they all work together to give payouts. Any combination of five of them on a payline offers a 200x win. Keep this in mind when you get payouts with chickens on paylines to avoid confusion.

That aside, the green tractor gets you 400x for five of a kind, and this drops just slightly to 300x for five of the pig. Additionally, the goat eating a mouthful of grass earns you 250x. The addition of these farm animals and how much character and personality they show is pretty cool. In most farm-themed slots, you don’t get that much depth out of the animals.

At the 150x level, you have two different available wins. Five of the purple A or red K will get you a win at this tier. Finally, players can pick up 100x payouts when they line up five of the yellow Q, blue J or orange 10 symbols. As you can see, the pay table is really balanced but still offers some good wins.

Lightning Box Gaming clearly wasn’t playing around when they put together the Chicken Fox Jr slot. Despite its cartoony animation style and fun-loving soundtrack, it’s serious where it counts. That’s with the features, game mechanics and ways to win. Combining a good look with great play is always a winning move. However, mixing that with stepping outside of the box takes things to a whole new level. That’s exactly what happened in this game, and it’s a great entry in the Lighting Box portfolio.

What is the Return to Player (RTP) for Chicken Fox Jr?