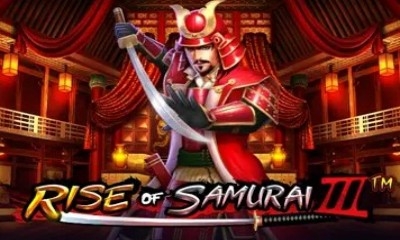 Pragmatic Play’s Rise of Samurai III online slot takes you into a warring period of Japan where warriors with various swords and weapons were well-known. With excellent graphics and an extensive free spins mode, this game brings a lot of fighting action to the reels.

Casinos with Rise of Samurai III

An Introduction to the Rise of Samurai III Slot

Something we love seeing in the online slot industry is popular sub-genres get fresh treatment. You’ll find no shortage of samurai-themed slots, and games like Bushido Ways are included in that. However, Pragmatic Play knows how to step outside of the box a bit and offer something fresh. That’s precisely what players get with their Rise of Samurai III video slot.

Standing apart from other games in the sub-genre also means standing out from the prequels.

You’ll notice that this game is one in a series. However, it stands out graphically by using a crisp style of animation for the characters and background. Several fires burn in the background to light your way through a temple courtyard. Additionally, the variety of different fighters on the board allowed Pragmatic Play to bring out different personalities. Overall, it comes together to create a great aesthetic and an immersive experience.

In terms of gameplay, they weren’t playing around when they wanted this title to be different. Using an older 5×4 style of grid, the developers definitely took advantage of the extra screen real estate. You can see this with how the features work for one thing. However, it’s also clear in how wins are set up in the regular game mode. The game mechanics involved are great, and they offer extra ways to get paid, as you’ll see below.

As we mentioned above, the betting setup for this game is based on a little bit of an older grid style that isn’t used as much in the modern era. However, instead of being based on “ways to win,” this game goes for a super solid number of paylines. This format decision plays directly into the way the gameplay unfolds in a really smart way. Here’s what you can expect:

As we mentioned above, the coins themselves aren’t strictly tied to the number of paylines. This has a big advantage in giving a minimum bet size of €0.20 instead of €0.40. However, it also means the payouts are multiples of the total bet instead of multiples of the amount bet per payline. We actually prefer this system because we believe it makes it easier for players to understand what to expect.

On another note, the volatility level in this game is pretty balanced. The regular game mode offers a reasonable hit-rate across those 40 paylines. This is paired up with multiplier opportunities as well as a solid bonus feature. While the feature brings a lot of value, it doesn’t throw the game into a lot of strong swings all that much. As a result, you’ll have a balanced experience with some moderate swings. We think this can appeal to pretty much all slot fans.

Gameplay and Features of the Rise of Samurai III Video Slot

The balance in the features for the Rise of Samurai III online slot is pretty solid. While it doesn’t have the larger variety of features like what you see in Rising Samurai, the features that are included are handled in a really smart way. Overall, it all comes together for a sufficient number of ways to get paid outside of the regular pay table. In the following, we break down each of these game mechanics and show what you can expect.

The dragon chest is a pretty critical symbol in this game as a whole. That’s because it’s the wild symbol, and it helps you to make winning combinations that wouldn’t have been possible without its help.

In particular, you’ll find these wild dragon chests on the second, third and fourth reels. The lack of chests on the first and fifth reels means no wild combinations. In many games, the lack of wild-only combos is a pretty serious loss of value. However, it’s not such a big deal here because of what else they bring to the table.

Each time a wild dragon shows up, it’s forced to have a multiplier attached to it. This multiplier is chosen at random between 2x, 3x and 5x. When at least one wild is a part of a combination, these multipliers will boost the value of that combination. However, in situations with more than one wild in a win, those multipliers add together. This means a total multiplier of up to 15x is possible. At the same time, any wild in a combo will offer a minimum multiplier of 2x. As a result, you’re still getting a pretty good deal.

The dragon symbol that looks like it’s directly facing the player is the scatter. However, it’s not used to trigger wins on its own. Instead, it’s only used for the free spins bonus feature. Moreover, these dragon symbols only appear on the first, third and fifth reels. With that said, since each reel has four positions, that makes it easier for them to land than if they only had three spots available.

In any case, three on the screen at once will get you started off with eight free spins. One thing that sets the free turns apart is that wilds are sticky. When they appear, they get their multiplier attached to them, and it stays the same until the feature ends.

Additionally, you get opportunities for more free spins with the yin yang overlay symbols. These come at random, and different numbers add more free spins to your total.

Another thing to be aware of is that this feature has a minimum total win. If you don’t get at least 10 times your triggering wager in payouts, you’ll be given a 10x instant win.

How to Win at Rise of Samurai III

The only thing you really need to know about the main game is that the volatility is in the medium range. As such, any major betting adjustment will defeat the point. Instead, just pick out a bet size near what you’re generally comfortable with. That’s all you’ll need to do since the swings are about average for the industry overall.

One additional way to play the game is to simply purchase the free spins. To do so costs 100 times your total bet size, and all you need to do is choose the button on the left-hand side of the reels. This forces three scatters to hit the screen on the following turn. However, it is possible to hit other wins on that spin. They are awarded normally before you go into the bonus round.

Payout Structure for the Rise of Samurai III Online Slot

The balance of the pay table in this game is similar to what we saw in the Story of the Samurai slot. In any case, the red samurai gets 20x for five, and this drops a bit to 12.5x for five of the purple fighter. With the green female fighter and the ninja in black, the wins are 7.5x and 5x for five, respectively. From there, a couple of mid-tier wins are found for five of a kind combinations of the red circular symbol and blue circular symbol.

Five different card rank symbols in different colors of a stylized font make up the low-tier wins. With the green A and red K symbols, a 1.5x win is yours for five on a line. Additionally, five of the purple Q, blue J or golden 10 symbols earn 1x. These are solid pays that can be hit with multipliers of up to 15x thanks to the multipliers.

Inside of the overall samurai slot sub-genre, the Rise of Samurai III video slot has a strong place because of how it differentiates itself. In terms of gameplay, the features complement each other really well. Additionally, it’s aesthetically pleasing without feeling overproduced. As a result of that and the balanced swings, we think this is a solid fit for most slot fans.

Which online casinos have Rise of Samurai III?

What is the Return to Player (RTP) for Rise of Samurai III?