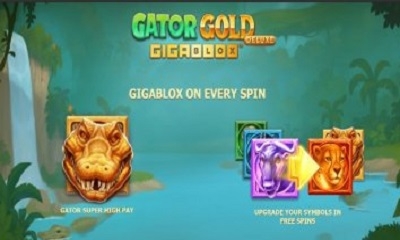 Gator Gold Gigablox Deluxe is a safari-themed slot that takes you to a savannah filled with alligators and other wild animals. The colourful creatures fit perfectly with the theme to provide beautiful visuals and exciting gameplay. A Free Spins feature allows you additional plays which can trigger at random, providing further thrills, spills and hopefully, wins!

With a somewhat similar aura as the original slot, there’s also the Upgrade Symbol feature, which increases the values of high-paying symbols.

Experience captivating gameplay with 4,096 ways to win, Free Spins, the Upgrade Symbol features and Multiplier Wilds. Activate Gigareels to earn up to 20,000x your stake!

Gator Gold Gigablox Deluxe boasts 6 reels, 4 rows and 4,096 way wins. Occupying the reels are both low-paying and high-paying regular symbols as well as special symbols. This slot offers high volatility, which means some pretty huge wins can be found, although they could take a while to appear.

The Gator Gold Gigablox Deluxe RTP is 96.00%, which is the conventionally accepted RTP for slots. The wager limits are accommodating too. You may bet from as little as 0.20 coins, all the way up to 100 credits per spin. The maximum reward available on this slot is an incredible 20,000x your wager.

You have some gorgeous graphics here, with the background featuring a waterfall and lake in which the gators reside. Some cheerful tribal drums and merry tunes play in the background, adding real enthusiasm to every spin you make.

The Gator Gold Gigablox Deluxe slot game has Yggdrasil‘s trademark Gigablox feature, in which any symbol can grow and cover the reels. Once this happens, it takes up between 2×2 and 4×4 reel space. These are known as Gigareels and they they greatly improve your winning potential. The wild or free spin symbol can also appear as Gigablox.

Multiplier Wilds feature is triggered during the Free Spins feature when wild symbols land with a value attached to them. The value can be 2x or 3x multiplier, which will be added to your feature wins.

If you obtain three Upgrade Symbols, the lowest high-paying symbols will increase to the next highest payout level. During the feature, Gigablox symbols can be activated, and landing multiple Upgrade Symbols is also possible.

Gator Gold Gigablox Deluxe has some regular symbols that blend nicely with the safari theme. The low-paying icons are card suits, including A, K, Q, J, 10 and 9.

The higher-paying symbols include a zebra, meerkat, buffalo, lioness and the golden gator. The latter awards the highest win, and with a default one coin bet, you would win a maximum of 6x your wager.

The Gator Gold Gigablox Deluxe Free Spins feature is activated by lining up at least five free spin symbols on consecutive reels. Every free spin icon that triggered the feature will offer 1, 2 or 3 free spins. This means you can have at least 5, 10 or 15 free spins to start the feature.

Once activated, you will be given an option to enter free spins or risk shooting for more free spins with the gamble feature. Generally, during the free spins, other features can activate and enhance your gameplay, including Gigablox, Upgrade Symbol and Multiplier Wilds features. Landing more free spin symbols in this feature will award additional free spins.

The golden gator is the wild symbol that awards wins for two to six symbols on the reels. The wild also substitutes all other symbols to create winning combinations except the free spin symbol.

How to Win at Gator Gold Gigablox Deluxe

For most symbols, winning in this slot requires landing three to six identical symbols from the leftmost reels. You have to align two to six golden gator wilds to land a win. Much bigger wins will come from landing the higher paying symbols, including the wild symbol. Since all other features can trigger during the Free Spins feature, we advise building your gameplay around it.

You can play Gator Gold Gigablox Deluxe for free by exploring the demo version and the majority of the casinos on this page provide such a feature. Sign up at any of our recommended casinos, and receive a fabulous deposit bonus, secure games and prompt customer support service.

The golden gator wild awards 6x your stake for landing six on the reels. This is followed by the lioness and buffalo symbols, with each offering 5x your wager for six. Land six Meerkats or Zebras and win 4x or 3.5x your bet, respectively.

To enjoy a truly exciting experience with this slot, we advise signing up at any of our recommended casinos. They all have well-optimized mobile casinos, great bonuses and promotions, top-notch security, lightning-fast transactions, hundreds of other games and much more besides. Sign up and grab your welcome bonus now!

Where can I play Gator Gold Gigablox Deluxe?

You can play Gator Gold Gigablox Deluxe at any of the casinos on this page. They have multiple banking methods, refreshing promotions, valid licenses and numerous games from tier-one developers.

Can I play Gator Gold Gigablox Deluxe for free?

Yes. Our recommended casinos provide a free play version of this slot in the demo mode. So, you can play with no real money deposit.

Does Gator Gold Gigablox Deluxe have a free spins feature?

What is the volatility of Gator Gold Gigablox Deluxe?

The volatility of this slot is quite high, which leads to higher than average payouts. However, you will need to be patient, as they don’t come around as frequently as with many other video slots.

This slot title, as well as the original version, are both products of Yggdrasil and are part of the Gigablox slots series.

Can I play Gator Gold Gigablox Deluxe on my mobile or tablet?

Yes. This slot is compatible with iOS and Android phones and tablets. Provided you have an internet browser, you can access the game.

What is the max win of Gator Gold Gigablox Deluxe?

Gator Gold Gigablox Deluxe has a maximum win potential of 20,000x your bet.

What is the Return to Player (RTP) for Gator Gold Gigablox Deluxe?