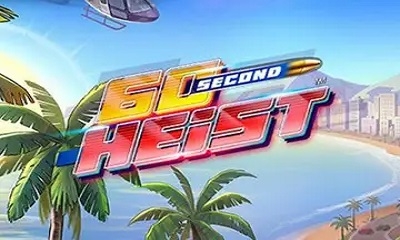 If you’re ready to go on a wild robbery spree adventure, the 60 Second Heist online slot from Yggdrasil Gaming has you covered. This title is just as exciting as it sounds with more than 1,000 ways to win on every spin and bonus features where you’re trying to beat the clock.

An Introduction to 60 Second Heist

For the most part, online slot fans love seeing situations where a game incorporates new ideas and mechanics. It’s even better if those fresh ideas tie the theme and gameplay together in smart ways. That’s the case with the 60 Second Heist video slot produced by Yggdrasil Gaming.

Every game mechanic and new feature in this title ties directly back into the robbery spree concept.

On the reels, you’ll see a variety of different characters who are in this heist together. However, you’ll also see a wide range of other things like the cash, diamonds and gold they’re after. This creates a situation where the Miami-inspired background setting really pops and brings the whole presentation together.

With the gameplay style, action is the name of the game for sure. It doesn’t matter if you’re in the regular game mode or the feature set. Everything is about a fast-paced style, especially once you get to the bonus rounds. Having to beat out the clock is just like a real heist, and it ties into the name of the game just how you’d expect. Also note that this is one of the Yggdrasil slots that was produced by 4ThePlayer, one of their software partners.

With a name like what the 60 Second Heist slot has, the format has to live up to the hype that the title creates. They were able to achieve this by giving players a larger than usual grid to play on. Not only does this create more opportunities to trigger features, but it also puts you in a situation where you have tons of ways to win on each spin. Here’s what you can expect:

As you would expect from a title with so much action, the volatility is above-average. We wouldn’t necessarily call it high, but it’s well above medium. Overall, we’d put it in the medium-high range due to the value the features bring primarily.

Due to the lack of paylines, payouts in this slot are listed as a multiple of however much you’ve bet for that spin. To give an example, if you had a 3x win on a wager of €5, that payout would be €15 total. This makes everything really clear when it comes to how much you’re able to win.

Gameplay and Features for the 60 Second Heist Slot

We love how the theme and feature set come together so well in the 60 Second Heist online slot. They definitely came up with some feature ideas and game mechanics that we haven’t seen before. However, this makes them pretty new to players as well, and that can make them a bit anti-intuitive. To help you out with this, we have broken them down here in the following so that you know what to expect.

This game has one woman character who stands out a bit from the others. She is wearing sunglasses on her head in the regular game mode with a bathing suit top. Additionally, she’s also holding a martini glass. She’s the wild symbol, but she also has a secret in this game.

Her payouts aren’t a secret, however. Here’s what she can offer you on the reels:

These winning combinations are up there with the best in the game. However, when you get this many wilds on the board at once, you’re pretty much guaranteed to create a variety of other winning combinations through substitution. That’s because these wilds substitute for everything except for the scatter symbols in this title.

The 60 Second Heist video slot has two features that truly impressed us. The Turbo Lock Re-spin feature is one of those two. However, you don’t actually have to do anything in particular to trigger this feature. It can trigger at random on any given spin, and you don’t need any certain combination of symbols to make it happen.

Here’s how this feature works. A timer is shown in the top-right corner of the screen that displays 10 seconds. From there, the timer starts going down, and all winning symbols lock on the reels as the other positions spin over and over again until the timer is finished. New symbols that land that are a part of any win lock in place as well during these re-spins.

The idea here is simple but powerful. You’re trying to beat the clock to run up as many wins as you can on that individual spin. Additionally, you’ll be granted payouts from the reels in this feature only when it’s finished.

The Win Time Free Spins are the main bonus feature in the 60 Second Heist slot. Additionally, they include a timer mechanic much like the re-spin above. However, it works a bit differently than usual, and it unveils the secret that the wild was hiding.

Since the 60 Second Free Spins symbol shows on the first, third and fifth reels during the regular game mode, you need to get all three on the screen at once to activate the feature. This feature has a few different moving parts:

During this feature, the characters show their true form. That’s when you discover the wild is an undercover FBI agent.

How to Win at 60 Second Heist

With its above-average volatility, this game offers a great opportunity for players who want a gameplay style that’s as fast-paced as the theme. However, some players don’t want the larger swings that come along with it. For those players, a straightforward betting adjustment can be a good idea.

For this type of betting adjustment, you’ll want to drop your bet size by about 25 to 33 percent. That will be plenty to smooth things out quite a bit. However, a larger decrease will probably be too much to keep things close enough to your original bet size to be interesting.

The man in red has a good payout of 3x for five of a kind. Additionally, the man in the white tank top earns 2.5x for five as well. Along with the wild, all three of these top symbols pay for lining up just two of a kind or more. In this all-ways format title, that helps out quite a bit with the hit-rate.

In the middle tier, you have a bag of diamonds that yields a 2x prize for five. However, five of the gold bars or the stack of cash will get you 1.5x for five of a kind combinations. From there, the card rank symbols take over with 1.25x for five of the red A. The purple K and yellow Q also give 1.10 for five of either.

As we said above, action is the name of the game with the 60 Second Heist slot. It’s one of those times when Yggdrasil Gaming has shown they really know how to make cohesive titles where the theme, graphics style and gameplay all form one consistent narrative. In particular, the bonus features with the timer mechanic stand out as being really great ideas.

If you’re looking for a game with more ways to win to get more action that way, check out the Buffalo King Megaways video slot. For a heist-based game with a little bit of a different presentation, take a look at Take the Bank instead.

The overall idea here is that every aspect of the title comes together perfectly. Action is the focus with a fast-paced style on the regular game mode, during the features and with the presentation. That makes it a great experience for players.

Which online casinos have 60 Second Heist?

What is the Return to Player (RTP) for 60 Second Heist?